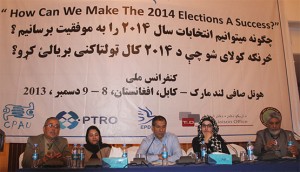 EQUALITY for Peace and Development (EPD) organized a national conference to identify community strategies to overcome challenges around the 2014 elections and to make people’s votes count. It was widely attended by nearly 200 civil society members (35% of whom were women) and represented all Afghan provinces, traditional leaders (community and religious) and more progressive civil society leaders. Youth, women, professional groups and community-based organizations all participated in the conference, which was held at the Safi Landmark Hotel in Kabul.

The conference concluded a series of four regional workshops conducted by other NGO members of the Salah Consortium namely the Sanayee Development Organization (SDO), Cooperation for Peace and Unity (CPAU), Peace Training and Research Organization (PTRO) and The Liaison Office (TLO).

Afghan civil society actors from across the country endorsed the 2014 elections and called on every citizen to help monitor and minimize misconduct. Both progressive and traditional civil society members declared their willingness to join efforts to enhance awareness about elections, decrease obstacles for women to vote, and minimize fraud and violence. The conference participants discussed how each of them could contribute to transparent and accountable 2014 presidential and provincial council elections. They prepared a policy paper outlining civil society’s preparation for the upcoming election and expectations from the other actors involved.