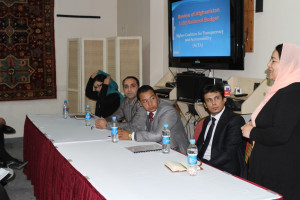 The budgets were reviewed based on key indicators such as the Tokyo Accountability Framework, the Open Budget Index, fair distribution of resources and fiscal sustainability.

The analyses gave insight into the national budget planning, execution, monitoring and reporting processes, emphasizing the role of Afghan communities in the entire process. The analysis also looked at the concern of Gender Based Budgeting practices to ensure gender mainstreaming in the national budget.

The reports were presented to key stakeholders such as media,  politicians, CSOs and students, and the audience gave their input to act upon the findings of the reports.