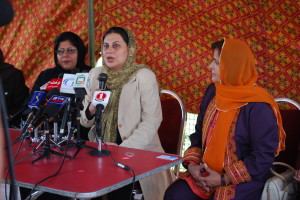 EQUALITY for Peace and Development (EPD) organized a two-day networking and interacting forum for women from all sectors (parliament, civil society, private sector, media, government and provincial councils) to bring women together, build coalitions, network and support each other.

As part of this project, several interaction programs were organized between female MPs and women in Kabul, Herat and Nangarhar Provinces. Female MPs and senators were also interviewed and their life stories were stored in a video and booklet, which was distributed to interested stakeholders. This initiative was the first networking platform between female MPs and women representing civil society. The participants eventually developed a clear action plan that focused on three areas: women’s political participation, gender budgeting and quality education.