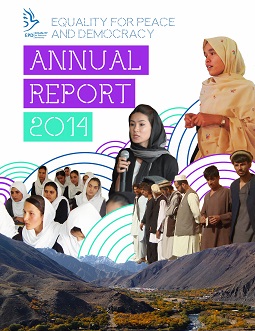 EPD is excited and proud to publish its 2014 Annual Report. It serves to inform our donors, stakeholders, beneficiaries and the general public on the progress made in our work in the areas of training and capacity building, advocacy and awareness raising, research and assessment and also organizational development.

The report reflects how EPD has grown in every sense in 2014, making the transition from a relatively new organization founded in 2010 to a well-established leader in civil society implementing programs all across Afghanistan with provincial networks established in 9 provinces. The Annual Report has been published in English, Dari and Pashto.

In 2014, EPD continued to be the lead civil society organization on engaging with the national budget and advocating for better budget planning and execution and improved service delivery. EPD conducted its independent civil society organization review of the 1394 draft national budget, and is very excited to announce an expansion of this initiative in the form of the Annual Budget Assessment, which will go further into the 1394 budget and analyzes actual allocations against key targets and indicators, as well as a comprehensive review of the 1392 final accounts.

EPD expanded the Afghan Coalition for Transparency and Accountability (ACTA) platform with three new networks and nearly 200 new members in 2014. EPD’s Provincial Women’s Network (PWN) also expanded to two new provinces and has been active in advocacy at all levels, from the grassroots to national initiatives, to promote women’s involvement in peace and transition, raise awareness on women’s participation in political processes and elections, and combat violence against women.

EPD took steps forward in amplifying the voices of its PWN members through its Women’s Perspectives Series, a series of publications and reports on critical issues facing Afghanistan from the perspectives of Afghan women. 2014 saw the publication and launch of papers on women’s perspectives on peace and security, and elections and civic participation. We are also proud to introduce the Afghanistan Gender Equality Report Card, which will be conducted through EPD’s Provincial Women’s Network every year, and an annual report card will be produced as a monitoring tool that enables civil society, the Afghan government, and the international community to hold the government accountable to its commitments to the women of Afghanistan and gender equality.

EPD also continued to build its partnerships with national actors, facilitating cooperation on research and initiatives with the Ministry of Finance, Ministries of Public Health and Education, Ministry of Women’s Affairs, Ministry of Justice, and the High Peace Council. Through this active engagement, EPD has come to develop a vast network of national and international partners from the grassroots level, civil society and government with which to continue to expand platforms and advocacies into 2015 and beyond.

It should be noted that EPD’s work in 2014 would not have been possible without the financial support of our donors and the support of our PWN and ACTA volunteers, our interviewees, our board of directors, our staff and key partners. We would like to thank you all for making 2014 a success.