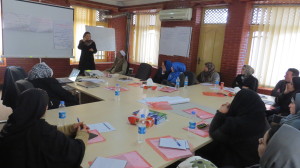 EQUALITY for Peace and Development (EPD) founded the Provincial Women’s Network (PWN) to ensure that women can be active agents of change in the processes of peace, reconciliation, reintegration and transition, rather than being treated as passive victims who need protection. The lack of representation in key Afghan institutions like the High Peace Council, where out of 69 members only 8 members are women, underwrites this need for change. The Transition Commission, which was established by the government of Afghanistan to lead and coordinate the transition process, is another institution where women are not represented since they do not even have one senior female member

These PWN alliances have been established in seven provinces (Kabul, Nangarhar, Balkh, Kandahar, Herat, Kunduz and Bamyan) in collaboration with community elders, religious leaders and other influential members of the community. PWN’s organize a variety of activities including film screenings about women’s participation and meetings with community activists.

Up till now, PWN representatives have accomplished many things. In close collaboration with EPD’s headquarters, they have been able to install community-based monitoring mechanisms, train qualified Provincial Coordinators, identify male supporters, and screen a documentary film (Pray the Devil Back to Hell) which tells the story of how Liberian women successfully pressured the government to negotiate a peace. The PWN’s have also organized several advocacy meetings to involve their communities in the peace transition process.

This project proved to be broadly successful in multiple regards, and helped to strengthen the activities and outreach of the PWN in all of the targeted provinces. EPD fully expects that the PWN, aided by the financial support of donors, will continue to build upon these strong foundations; not only in the current provinces, but also by further expanding into new areas.

Additionally, EPD also plans to continue various activities instigated within these programs. The Gender Equality Report Card will be implemented annually, providing a regular monitoring tool to track the government’s progress related to gender issues, and further research will be conducted and shared.