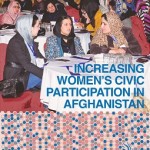 This report presents the findings and conclusions of an end of project evaluation for the Increasing Young Afghan Women’s Civic Participation project. The project under evaluation was initiated in June 2013 with the aim of increasing young Afghan women’s participation in the 2014 elections through a civic education program with a special focus on young women in the north and south regions of Afghanistan and a capstone National Conference for women from all provinces. The original project design planned activities over a period of 12 months in advance of the April 2014 Presidential Elections.

This evaluation concluded that the project did contribute to the exceptional level of women’s participation in the 2014 elections, which constituted a 67% increase in women’s voter turnout from 2009. Every participant interviewed after the elections felt that the project had a direct impact on the high turnout of women in the first round of the elections. Participants felt very confident that the conference had a tangible multiplier effect, where participants who had received information at the central level had returned to their provinces and shared what they had learned and experienced with hundreds more women. Several felt that the conference promoted an understanding of women’s role, rights and responsibility in the elections, and many felt that the experience had helped them make a better decision on who to vote for in the interest of promoting and protecting women’s rights.

In addition, the project succeeded at providing a forum for discussing challenges to civic and political participation for women and developing recommendations for key stakeholders. The conference and regional activities functioned as hubs for connecting women from all parts of Afghanistan to one another, and connecting women from the provinces with women civil society and political leaders and activists at the central level. A total of 200 participants attended the two-day National Conference on Women and Elections, of which 68 were participants who were brought from the provinces to attend.