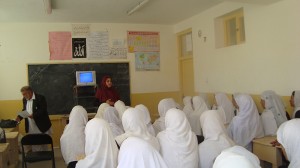 EQUALITY for Peace and Development (EPD) is strongly convinced that civil society organizations (CSOs) have a crucial role to play in making people aware of corruption and to address it. While concerns related to corruption have been on the advocacy agenda for some time, Afghan civil society organizations have been mostly active in addressing issues related to peace building, conflict resolution, human rights, women’s rights and education. The government has been sensitized on the corruption issues and they have also taken several initiatives to address the problem. However, these initiatives either lack strong leadership or the assigned institutions are not given the authority to implement the recommendations made. The Afghan government is thus still not able to provide quality public goods to its citizens in a transparent manner, and also prevent the necessary institutional reforms to improve service delivery.

To address this issue, EPD by support of Twanmandi launched a platform called Afghans’ Coalition for Transparency and Accountability (ACTA) in Kabul, Nangarhar, Bamyan and Herat. This platform aimed at providing advocacy both at the government level and the parliament level for enhancing transparency and accountability in government procurement and recruitment processes

Furthermore, the project provided opportunity of raising awareness and capacity building among students in universities, high schools and community based organizations by screening documentary movies to give them better understanding on different forms of corruption and the way out to combat them

EPD launched Afghan Coalition for Transparency and Accountability for fighting corruption and demanding transparency and accountability (ACTA) of public resources. EPD built capacity of its ACTA members by holding workshops on “Community Based Monitoring Mechanism” in the targeted provinces. During theis workshops the participants developed their plan for addressing the community problems and monitoring governmental service delivery. Through intensive monitoring and biweekly advocacy meetings, the low quality of public service delivery in several provinces has been exposed by ACTA’s activities.

Furthermore, a documentary film was screened to a high number of youth from community-based organizations and youth groups in understanding the various forms of corruption and provides them with tools to tackle corruption. This film reflects a community’s struggle in Kenya striving for transparency and accountability in the government, and tells the story how a community was mobilized to address the government officials’ misconduct.