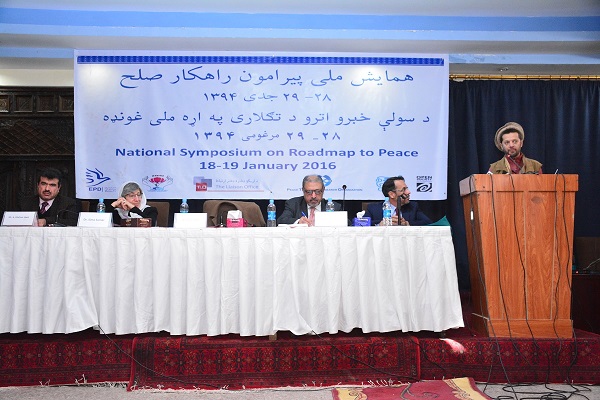 EQUALITY for Peace and Development conducted a two-day event under the title “National Symposium on Roadmap to Peace” on 18th and 19th January 2016 in Kabul. Around 110 peace activists and representatives of organizations working to promote peace such as influential tribal elders, members of High Peace Council, government entities, United Nations Assistance Mission in Afghanistan (UNAMA), Provincial Woman Network (PWN), academia, media and partner Civil Society Organizations (CSOs) from Kabul and provinces took part in this symposium. They discussed and provided input for the draft statement of Roadmap to Peace, which has been composed in the light of regional dialogue outcomes and input taken the research on Afghanistan Peace and Reintegration Program (APRP).

This symposium was conducted with support of Open Society Afghanistan and included panel discussions and group works as well as final statement.

On the first day of symposium; Mr. Omarzad, the Interim Executive Director of EPD delivered an inaugural speech on roadmap and importance of peace. Later on, Dr. Sima Samar, Chairwoman of Afghanistan Independent Human Rights Commission (AIHRC); Prof. Wadir Safi, lecturer and Director of Kabul University Research Center; Mr. Ghafoor Lewal, Deputy Tribal and Borders Affairs Minister and Mr. Fahim Dashti, political analyst and social activist, delivered short speeches about the topic of the symposium. During her speech, Dr. Samar criticized absence of women in peace talks. According to her, “one of the main problems in previous and current peace negotiations is that women are not actively involved, whereas, the sufferings and problems women faced and still face as result of ongoing conflict cannot be ignored”. Similarly, Prof. Safi stated that “war is a major barrier to youth education and causes brain drain”. In his remarks, Mr. Lewal pointed to the important role of tribal elders in the peace process. He said: “we should take the tribal structure into account. Some rural areas are very vulnerable to war and conflict; hence, we should engage these areas in peace programs”. Lastly, Mr. Dashti, stressed that “geographical location of Afghanistan, as a bridge that connects different regions of Asia, is indicative of the fact that in addition to Afghanistan peacebuilding is also in the best interest of region”. 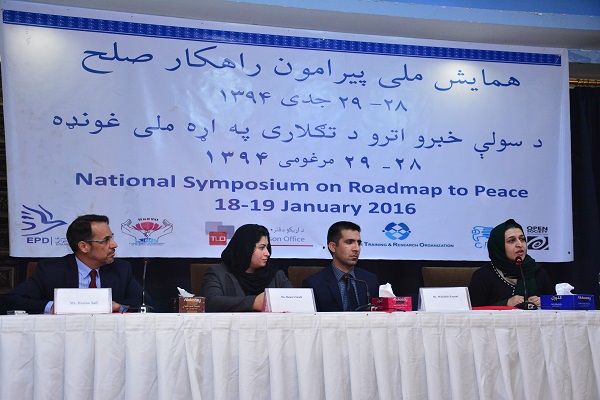 Following speeches, a panel composed of aforementioned speakers discussed different aspects of peacebuilding and bringing long-lasting stability in the country, and answered questions posed by participants. Then, important presentations on main findings and publications of CSOs about peace were delivered by Ms. Hasina Safi, Member of Steering Committee of People’s Dialogue on Peace; Ms. Homera Saqeb, Chairwoman of ACSON and Mr. Matiullah Kazmi, Program Officer of Future Generation Afghanistan.

The participants were divided into five groups in the afternoon and each group was led by a facilitator to discuss and share ideas about findings of the researches done on the subject of peace. The main focus of the discussions was on how to link local peace efforts with national or formal peace process, exclusion of warlords from peace talks and engagement of community leaders in peace efforts.

On the second day of symposium, representatives of each group shared their main ideas with other participants. Similar to the first day, the participants were divided into groups to discuss and prepare answers for the questions about peace negotiations at local level, challenges of putting peace agreements into practice and who should be assigned to lead peace negotiations. Mr. Farhadullah Farhad, the caretaker director of High Peace Council Secretariat was asked to join the program. He shed light on achievements of peace process and emphasized on the role of women and civil society in peacebuilding. According to him, “peace negotiations should be held in the presence of women mediators”. After the speech, he answered questions posed by participants. Afterwards, representatives of each group presented the findings of their relevant group discussion. 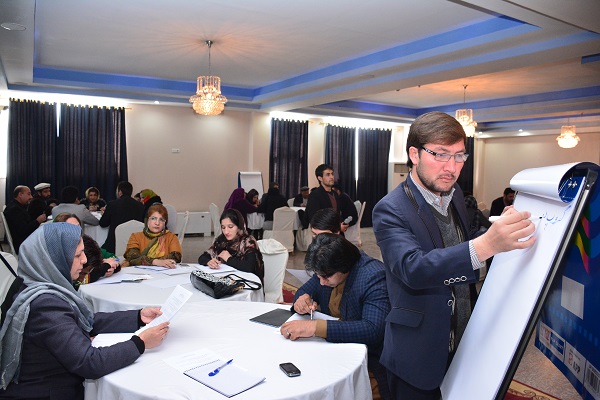 The symposium was concluded after compiling inputs made by participants during group works. The inputs were then incorporated into a final statement and was shared with participants, partner civil society organizations and media through email. Finally, the statement will be used in another symposium that is supposed to be held in at international level to create a Roadmap for Peace.

Please visit our Facebook page (feeds can be accessed by clicking on the right tab of the page) to get updates of the symposium.